In 1992, a report was presented to the Swedish Minister of Education, proposing the establishment of a business school in Jönköping with an international dimension in terms of faculty, student exchange and curricula.

In the end of October 1988, Professor Åke E Andersson, who was very active in the debate on regional development, met the (then) Governor of Jönköping County, Gösta Gunnarsson, over lunch to discuss the regional development issues. As a result of this lunch meeting, the county administrative board commissioned an analysis of Jönköping County with an emphasis on knowledge, infrastructure and culture.

This first report, titled Regional revitalization - an analysis and vision for Jönköping County was delivered to the county administrative board in early 1990. 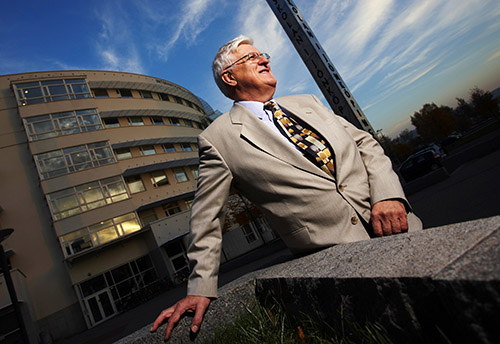 One person who had been a particular help to Andersson was (then) PhD Charlie Karlsson. The main proposal of the report was an investment in an internationally oriented business school of the highest class in Jönköping.

Many thought that the proposal was unrealistic but others found it interesting. A survey conducted in the region showed that there was strong support for such a school.

The county administrative board wanted to move forward, and later that year the Foundation Jönköping International Business School was founded, with the governor Gösta Gunnarsson as chairman and Charlie Karlsson as project manager and managing director. In the coming years, extensive work was done to establish the idea of an international business school in Jönköping. 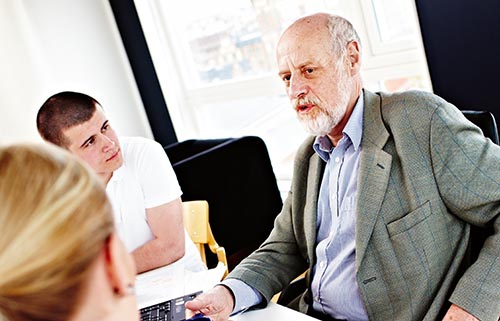 The Foundation Board published a report (with Charlie Karlsson as the main author) in 1992 containing "a substantial proposal for a new school in Sweden that can contribute to the development and renewal of higher economic education and research in Sweden".

The report argued for entrepreneurship as well as small and medium sized companies as a major profile. This was presented as an alternative to the “administrative” perspective that was traditionally dominant in Business Administration and Economics education in Sweden. Further cooperation with local and national businesses was stressed.

A major innovation presented in the report, and later implemented, was the host company programme, where undergraduate students could have a host company to create an arena for meetings between theory and practice.

The report also strongly argued for resources to establish a doctoral programme, based on the belief that a possible success of the undergraduate and master programmes was dependent on a faculty with strong academic reputation and knowledge. 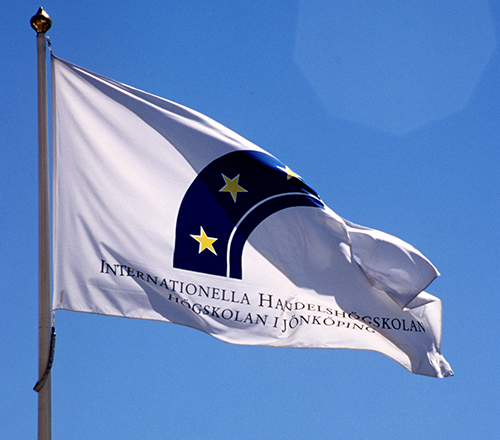 An opportunity to implement the plans presented itself when in 1993, the Swedish parliament decided to privatise the then rather small governmental university in Jönköping. Jönköping University became a foundation university and The Department of Management and Economics became the base of the new Jönköping International Business School. The other two schools were School of Education and Communication and School of Engineering. (School of Health and Welfare became part of the university in 2002.)

A Board of International Advisors was set up, and comprised 12 prominent Professors from renowned universities in Europe and the USA.  During the build-up of JIBS, the experience and expertise of the board  was of great value, and also played an important role in the recruitment of the first Professors.

When the first students arrived in 1994, there was a four-year MSc programme in International Business Administration (with the option of  leaving after three years with a BSc), a three year BSc programme in  Business Informatics (MSc from 1995) and an LLM programme in Commercial  and Tax Law. In 1995, another programme, the MSc in Economics and  Politics, was started. 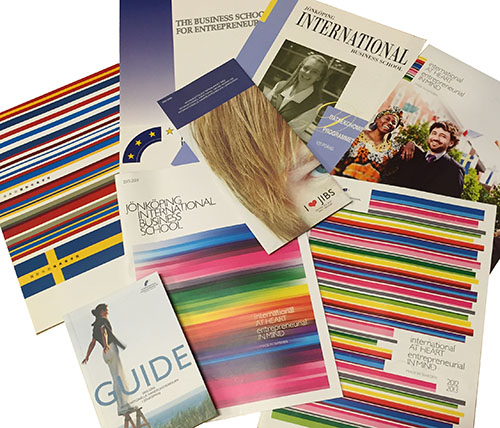 Right from the start, all programmes had an international focus, and all students had the opportunity to study abroad for one or two terms.  JIBS started to develop partnerships with universities all over the  world, and had 200 partnerships in 2001. From 2003, international  students could study an entire bachelor programme in English at JIBS.

Entrepreneurship and collaboration with society were stressed in both  research and education. All students in Business Administration worked  together with a host company for the first two years of study. The host company programme was copied all over Scandinavia. 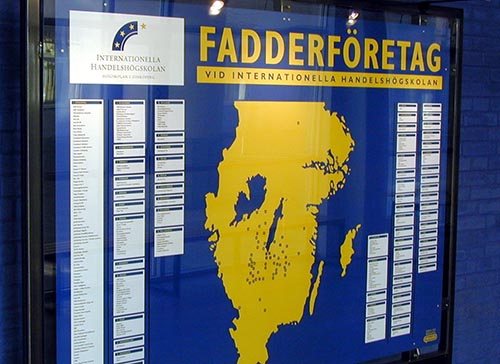 The host companies displayed in the JIBS lobby

In the beginning, JIBS had 33 employees, including administrative staff and three Professors.

In 1995, Jönköping University was granted the right to award PhD degrees in Business Administration, Economics, Political Science and Law at JIBS. The doctoral study programme started in October 1995. The first thesis was defended in December 1997 by Anders Melander. The first woman to defend her thesis at JIBS was Eleonor Alhager, who defended her thesis in Law in 2001. 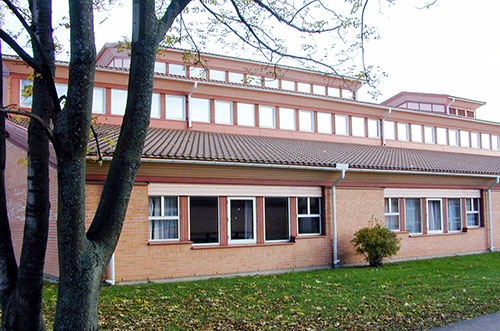 At the start in 1994, classes were held in two buildings, about a half kilometer apart. The other schools similar problems. Thanks to a joint initiative between the municipality and the university, and with sponsorship from some 30 regional companies, work could begin on a new campus in 1995. The characteristic round white building of JIBS was designed by White architects in Gothenburg and was inaugurated in 1997. 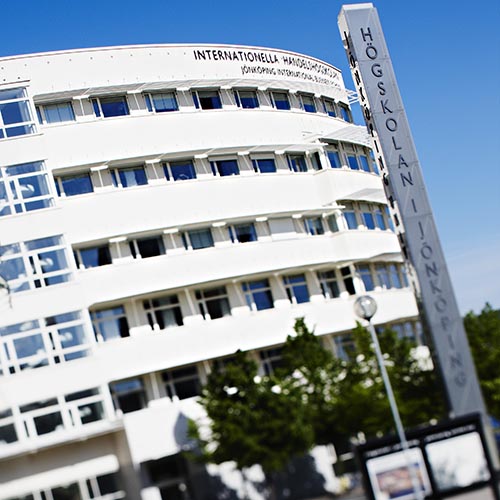 The JIBS building, a landmark in Jönköping

Since 2001, a significant number of "centers of excellence", mainly financed by external funds, have started. Institute for Foreign and Commercial Law, an information center which had already existed for about 40 years, was taken over by JIBS in 2001 when the Federation of Swedish Industries and the Swedish Employers' Confederation (SAF) got together and formed the Confederation of Swedish Enterprise.

CESIS (Centre of Excellence for Science and Innovation Studies) was established jointly by JIBS, KTH and Sister (The Swedish Institute for Studies in Education and Research) in 2003 and funded by Vinnova, and that same year MMTC (Media Management and Transformation Centre) was founded with financing from Carl-Olof and Jenz Hamrins Foundation.

In 1995 CeFEO (Centre for Family Enterprise and Ownership) was started, and in 2007 Prosperity Institute of Scandinavia.

The focus on entrepreneurship in research has resulted in strong international recognition. Based on publications 1995-2006, JIBS was ranked ninth globally and third in Europe in entrepreneurship research. (Crump, Abbery & Zu, 2009).

1970 A university-level education in Business Administration is started in Jönköping, in collaboration with the University of Gothenburg.

1977 Jönköping University is created as a governmental university, and two national programmes in Business Administration are started: Accounting and Auditing and an education for secretaries.

1990 The Jönköping International Business School foundation is created to work for the implementation of a new business school in Jönköping.

1996 The first installation of professors.

1997 Opening of the new Jönköping University campus. JIBS is first in Sweden to use the international ECTS scale for grading of courses.

2001 JIBS signs a contract with its 200th partner university.

2003 Entire programmes are taught in English, to provide an opportunity for international students to study full-time in Sweden.

2010 1000 regional scientists from around the world gather in Jönköping for the 50th ERSA congress, organized by JIBS together with ERSA (European Regional Science Association), making it the largest congress ever for regional scientists.

2012 The first award ceremony for JIBS Entrepreneurship Challenge, a student competition made possible by a donation from Lennart Israelsson.

2013 JIBS becomes a signatory of the Principles of Responsible Management Education (PRME). The initiative Vertikals is launched, aiming to increase the visibility of JIBS.